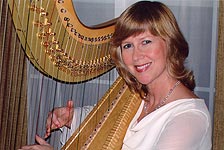 Janet Jackson Witman is known for her ability to successfully crisscross the realms of classical and celtic harp music.

Her classical training began as a young girl and eventually took her to the Curtis Institute of Music in Philadelphia. She earned a Bachelors of Music Degree under full scholarship studying under Marilyn Costello of the Philadelphia Orchestra. Janet also studied with the legendary Alice Chalifoux at the Salzedo Harp Colony in Maine, and with Maria Lorcini of the Montreal Symphony. She earned teacher certification at West Chester University.

Janet has performed as soloist with Allentown Symphony, Kennett Symphony, Hilton Head Symphony and the Concerto Soloists of Philadelphia. She performs regularly with the Wheatland Chorale of Lancaster, Madrigal Singers of Delaware, Wilmington String Ensemble, Philadelphia Classical Symphony and Kennett Symphony. She has been featured in the prestigious Green Room of the Hotel DuPont in Wilmington, Delaware for over 20 years. 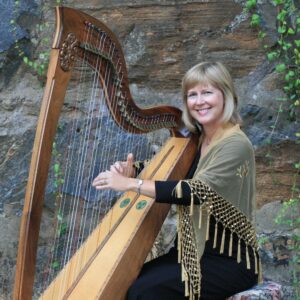 Janet has been on faculty at the Ohio Scottish Arts School with Sue Richards, and at “Beginning in the Middle” with Kim Rowe and M.J. D’Arville and the Pacific Harp Institute in Washington with Alison Austin and is heading a harp program at the Wilmington Music School. In her studio, she works with over 30 harp students, many of whom have won scholarships and awards.

Janet has published several harp ensemble arrangements which are sold nationally and internationally. Her recordings include, “Shule Aroon” and”Behind the Green Bushes” with HeartSounds, “Mozart and Me” and “Celtic Lullabies” with songwriter, Kevin Roth, a classical CD featuring music for harp, organ and flute, and “Christmas Crossings” and “Celtic Journeys” with Brandywine Harps, which she arranged and produced.

Janet and husband Kevin reside in the Brandywine Valley of Chester County, PA with their two cats, Pumpkin and Sadie. 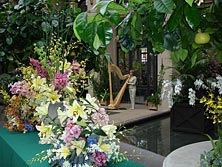 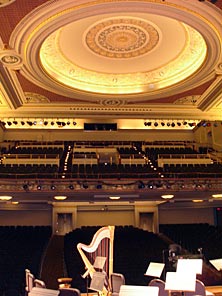 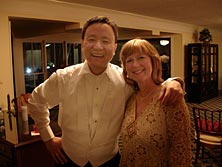 Philadelphia Orchestra Concertmaster, David Kim and Janet after their performance of Bruch’s Scottish Fantasy with the Hilton Head Symphony, S.C. in February 2007.

“Absolutely the nicest harp Christmas CD I have ever heard! Good job, guys! The arrangements and engineering are wonderful, the playing is really great, and it always puts me in a good mood.”

“I just got home from some weekend concerts, and your package is here on my desk. So, I’m listening and wow- it is just so relaxing and wonderful. Congratulations over and over!”

“Wow, what an absolutely ethereal sound, each of you must be a step closer to the angels.”

“Janet’s ensemble arrangments are innovative, and no one gets a boring part!”

“I’m fascinated by your arrangements. Your work with the Somerset Harp Ensemble was the absolute BEST I’ve ever heard at a conference.”

“I wanted to tell you how much I LOVE this piece (A Christmas Canon). I’ve been playing it incessantly and have somehow managed to memorize both parts. Thank you for such a lovely piece.”

“This Cd has been my favorite of the season this year. You did everything right with this CD. Kudos to you and all the harpists- you’ve made a wonderful recording.”

“Hi Janet, Just a quick but heartfelt thank-you for your music. You have a devoted following here in western Montana, and a small group gets together regularly to play your ensemble music. We cannot get together without playing “America the Beautiful” and sighing, loudly, collectively. “Ohhhhhh, so beautiful”–it’s becoming funny! Thanks for giving us so much pleasure!”

“Got the music in today’s mail (that was fast!) Lovely and well worth the wait! Please keep me on your mailing list. I’ve enjoyed everything you’ve written so far!”

” The arrangements, performances and recorded sound quality on this recording are all excellent. I am so pleased to have it!”